Election Day in The Netherlands

Election day in The Netherlands

The Dutch have two votes today. One for the regional elections (which indirectly elects the Senate) and one of the Water Board! Anyone with a Dutch residence permit can vote for the Water Board, which decides on how the tax money will be spent. Building Dykes or Redirecting Water? Can the Water Board generate energy out of water? Or should the state not generate and sell energy? This topic is more relevant than ever before and has been an important topic for the election campaigns.

In 2018 the coalition agreed on a new Climate Accord, that needs to address the Climate change issues in the Netherlands. But only just a week ago the National bureau for Economic Policy Analyses released a report crushing the measurements taken by the government for Climate Justice. Because not only do the low incomes pay the most, also are the measurements by far not enough to reach the international goals. As a response, PM Rutte announced to introduce Co2 Tax. This only happened after the biggest #climatemarch in The Netherlands in history and the efficient mobilisation by the opposition.

Read more about the new Co2 Tax in The Netherlands.

Voting, demonstrating, actions, policies and supporting a progressive party,  all do have effect!

Another Europe Is In the Making.  Be Part Of It! 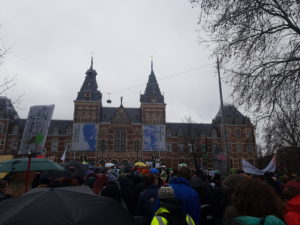 Why European May asked Frontex to disband their agency.

Last week an employee from Frontex signed up on the ‘Be Part of It’ form on our website. Below you can read the reaction that was send back to explain why European May will not Read more…

Exactly 70 years after the proclamation of the Universal Declaration of Human Rights, Pro-European activists of the network European May will remind the European Union of what values have been violated along the way. They Read more…

You can find out more about which cookies we are using or switch them off in settings.

This website uses cookies so that we can provide you with the best user experience possible. Cookie information is stored in your browser and performs functions such as recognising you when you return to our website and helping our team to understand which sections of the website you find most interesting and useful.

Strictly Necessary Cookie should be enabled at all times so that we can save your preferences for cookie settings.

If you disable this cookie, we will not be able to save your preferences. This means that every time you visit this website you will need to enable or disable cookies again.